A 4K uncompressed picture requires four times the bandwidth of a HD signal. It hence requires the whole SDI cabling infrastructure to be multiplied by four.

On the other hand, current workflows for IP transport of video signals are based on 10GbE networks, while a 4K60 feed requires 12 Gbps.

Major technological moves often come with lots of standard or proprietary solutions making their way in the industry.

People then exhibit preferences or dislikes in using either solution, and the market progressively adopts a few reference standards that will regulate equipment behavior to allow interoperability.

The official partners of DELTACAST include:

DELTACAST is member of the TICO Alliance and actively works on integrating this technology within its portfolio of video I/O cards.

This transition is not only about technological challenges, but also about opening doors to new ways of working, to closer collaborations between different TV production departments, and to innovative economic models. 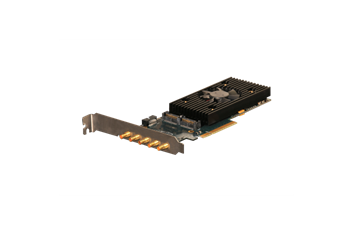 DELTA-3G-elp-tico-d 4C is a quad-port SD/HD/3G SDI card. Each port can be used as an input or an output. UHD and 4K video can be conveyed either on four links, or on a single wire thanks to the TICO compression.
Note this product is discontinued, ask DELTACAST for more information.

DELTA-ip-ST2022-6-tico is a dual-port 10GbE card. The main port supports up to three 3G/HD/SD SDI channels embedded in ST2022-6 datagrams with optional support for FEC streams as per ST2022-5, while the second 10GbE port is used for seamless protection switching of datagrams as per ST2022-7.

UHD formats are supported thanks to TICO compression. The card can be freely re-flashed as an input or an output card.

Do not hesitate to contact DELTACAST for more information.