What does keying mean ?

Linear keying is the process of mixing two pictures with a key to obtain a resulting combined picture.

It is also called compositing, mixing, or alpha blending. 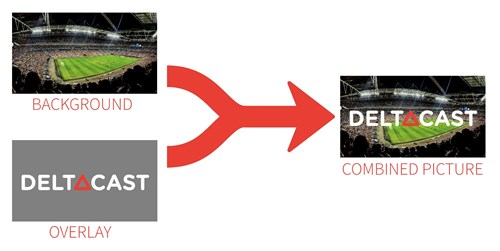 A picture is composed of pixels, each one having its own color information stored as RGB or YUV components.

In other words, the key also express the opacity of each pixel of the overlay picture. It can also be name the alpha channel.

The key, or alpha information, is often carried on as a grey levels picture, or luminance information, where pure white means opaque and pure black means transparent.

Linear keying is achieved using the following formula applied over each of the color components :

There is second commonly adopted mixing method named the additive mode, in which the alpha information defines how the overlay obscures the background picture.

To use additive blending, the overlay color information must be premultiplied with the key information before being fed to the following formula :

Why a hardware keyer is useful?

In video applications using interface cards in a PC, video mixing can be done in software on the CPU or accelerated on the GPU.

There are several drawbacks doing so :

Using a hardware keyer, background video is processed onboard with an end-to-end latency shortened to a few dozens of pixels. The host PC only handles the overlay graphics and hence saves lots of CPU cycles and PCIe bandwidth.

The most common use case of a hardware keyer card is obvisouly to perform internal keying, where the card overlays computer graphics over a live video feed. 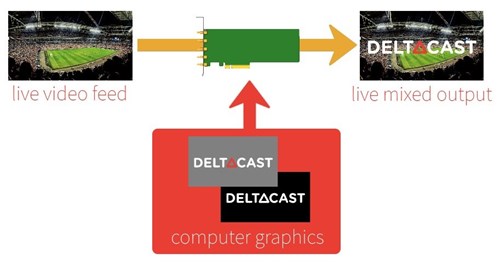 An important requirement in this use case are the fact that the card implements a failover protection to loop input to output in case of power outage or of application crash, what is typically achieved using bypass relays.

Another typical use case of such a card is where it outputs a fill and a key signal to feed a downstream video mixer.

In both cases, it is important that the card accepts resources formatted in either RGBA 4:4:4:4, the color space commonly adopted in computer graphics, or in YUVK 4:2:2:4, an alternative buffer format requesting less bandwidth and particularly interesting for high resolutions such as 4K.

Besides this, some Deltacast cards support addition use cases, such as acting as a video mixer : 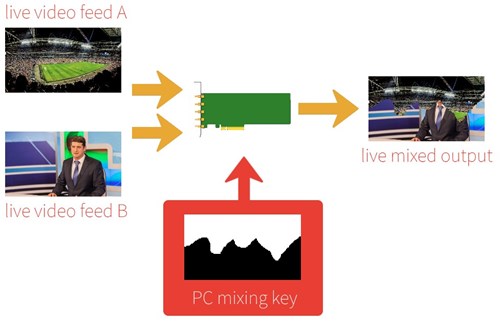 One of them is call the ANC mixer, and is used in conjunction with the video keyer to override ANC and VBI data present in the live feed with other ANC and VBI data coming from the caller application, on a line per line basis. This is particularly useful to implement audio routing, for example.

Another feature dedicated to keyer-based applications is the delay line, which is used to delay the background feed of the keyer by several frames, to allow the application building up overlay graphics or ancillary data (audio or other) based on this feed.