The term 8K stands for resolutions with a width of around 8000 pixels. 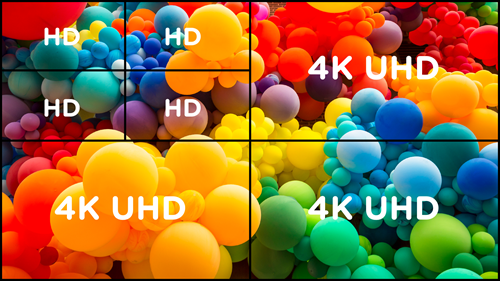 One 8K picture represents a massive amount of pixels. Around 33 million of them, actually.

CLICK ON THIS PICTURE and display it at a 100% scaling factor. Pan to the 4K and HD zones to see details loss! 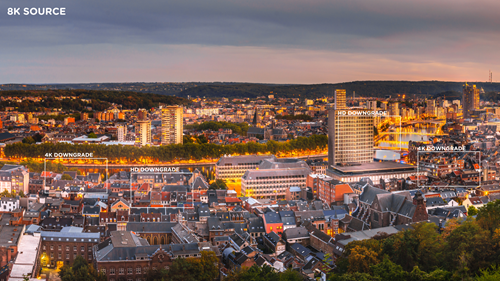 The 8K technology is intended to large format displays, although also supported by some high-end smartphones. 8K resolution is often associated with high frame rate (60fps and above) and with High Dynamic Range (HDR) colorimetry, to offer an unprecedented viewer experience.

At 60 frames per second, an 8K feed represents around 2 billion of pixels per second. Such a pixel rate brings in new challenges in terms of capture, transport, storage, processing and display!

As video interfacing is the core business of DELTACAST, let’s focus more on the transport aspects.

SDI interfacing norms evolved over the years to reach the incredible throughput of 12Gbps, which is the capacity required by a 4K feed.

This time, the 8K picture is split in four 4K divisions, on each one carried on through a dedicated 12G-SDI. Not being standard, this technique requires the four link to be perfectly synchronized, and properly identified to not mix up the quadrants during 8K picture reconstruction. 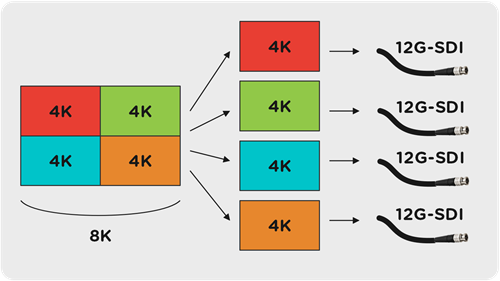 Then, the SMPTE consortium published the ST 2082-12 standard for 4320-line and 2160-line source image and ancillary data mapping for quad-link 12G-SDI. This norm defines the quad-link transport method also known as “2SI” for two-sample interleaving.

In this method, the 8K picture is divided into four 4K sub-images in accordance with the 2 sample interleave subdivision illustrated below. Then, each 4K sub-image is divided again into four 1080p sub-image accordingly to a similar method (ruled by SMPTE ST 2081-10), resulting in eight data streams to be muxed together into the 12G-SDI container. 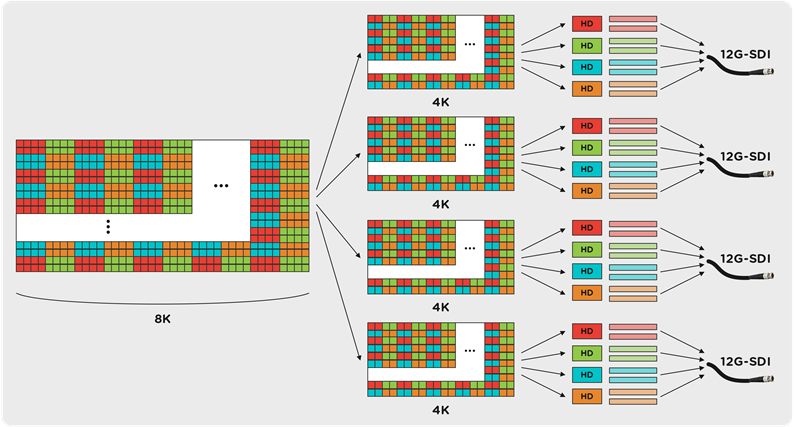 HDMI 2.1, with its 48Gbps bandwidth, support 8K transport at up to 50 frames per second in 4:4:4 RGB or YUV. To reach higher format or frame rate, HDMI 2.1 uses a 3:1 ratio mezzanine compression named DSC (Display Stream Compression).

DisplayPort 1.4 also combine the DSC compression with the HBR3 transmission mode at 32.4Gbps to support 8K transport at up to 60fps. The new DisplayPort 2.0 standard triple the available bandwidth, and allows 8K60 HDR uncompressed transport.