This demonstration at the technical room of PANASONIC at NAB (#N205) showed a perfect interoperability test between PANASONIC and DELTACAST of their TICO equipment.

The equipment of PANASONIC consisted of:

The equipment of DELTACAST consisted of: 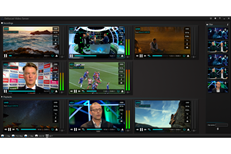 “With this demonstration and with our first IP products, we prove once more how we are active in the evolution of the TV broadcast world”, says Christian Dutilleux, CEO of DELTACAST. “It’s our role to provide our customers with a smooth evolution towards IT and to ensure interoperability”.

“We’re so happy to show a possibility of TICO: transmission of 4K video over current 3G-SDI workflows and its interoperability with another member of the TICO Alliance”, says Kunihiko Miyagi, Executive Vice President of Panasonic’s Broadcast and Cinema Imaging Network Business Division. “We’re introducing a right technology in the right place for benefit to customers”.

With more than 60 available video cards and a unified SDK, DELTACAST offers the most comprehensive portfolio to professional video developers, to create performing high-quality video systems under Windows, Linux and OS X. DELTACAST can also answer to custom projects and OEMs specific requests.

Founded in 1918, Panasonic entered the professional video industry in 1981, and is well-known for contributions to the industry provided by cameras such as the VariCam series, codecs such as DVCPRO, AVC-Intra, and AVC-Ultra, the P2 solid-state recording system, which was awarded a Technology and Engineering Emmy, studio camera series, and switchers.

< Back to News overview